HELP BY JOINING, DONATING OR COLLABORATING
WITH US TODAY 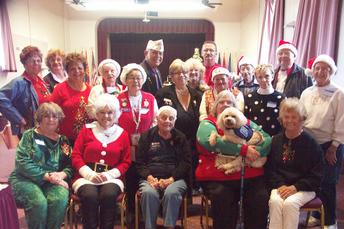 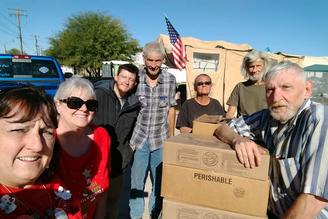 Last year, Arizona members volunteered over 175,000 hours of service to

of service to the Veteran Health Care System in Phoenix, Prescott and Tucson.

shop, at no cost, for themselves and their loved ones.

The Arizona American Legion Auxiliary partners with the Arizona Veterans

Administration to conduct a Veteran’s Creative Arts Festival. The competition is part

inpatients and outpatients. Over 100 entries ranging from art, music, dance,

drama and creative writing were entered in the 2017 Arizona festival. Learn more

Arizona members donate clothing and personal care items to local veteran organizations such as Veterans Helping Veterans, Veterans First and Mary Ellen’s Place. They attend and contribute truckloads of clothing and other goods to local Stand downs supporting veterans. One local unit holds parties for visually blind lady veterans twice a year. Arizona units raised over  $50,000 for Soldier’s Best Friend—an organization that pairs veterans suffering from PTSD with rescued shelter dogs. One Arizona unit was recently recognized with the National President’s Award of Excellence for their efforts to make and deliver food to homeless veterans in their inner city community.  Sometimes the effort is collaborative and greatly effects many:  the Arizona American Legion Family donated $100,000 to the Tucson Fisher House—a home away from home for families of veterans seeking care at the VA. Other times the effort is one member who greatly effects one veteran-- like when a Green Valley Unit member ensures that a veteran who needs rehab at the VA has the resources to get to the session with some cash to spare. These described efforts just skim the surface of the work being done across Arizona.
Learn more about the American Legion Auxiliary VA&R program at the Auxiliary’s National website 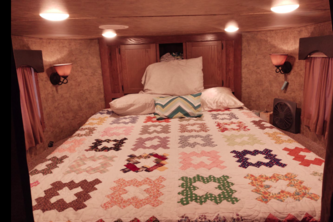 Poppies at Peoria’s Chick Fil A on Veteran’s Day

As an individual or business, you can make a difference in your community through the

Coming home may be the end of one journey for many veterans; it is also the beginning of a new journey to transition to a “new normal.” Helping them get there is at the core of the purpose and service of the American Legion Auxiliary. Members are passionate about providing care and comfort to our heroic U.S. service members who are so highly deserving of everything we can possibly do for them. 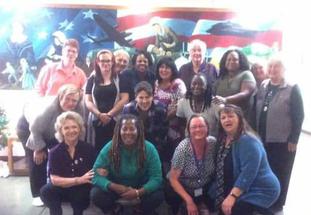 its inception in 1921. On Memorial Day and Veterans Day, Arizona Auxiliary units distribute

their therapeutic rehabilitation. Poppies have been distributed by Arizona members at

Fry’s Marketplace, Chick Fil A and Walmart/Sam’s Club and at poppy breakfasts, memorials

and gatherings commemorating veterans.  The tens of thousands of donated dollars

gathered go directly to assist veterans in our communities.

Learn more about the